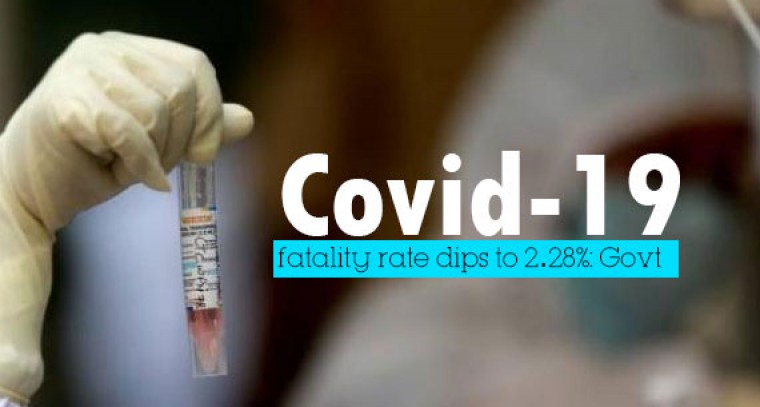 New Delhi, July 27 (IANS) Amid spike in Covid-19 cases with the latest highest single-day rise of 49,931 cases in the last 24 hours, the coronavirus fatality rate is progressively falling and has dipped to 2.28 per cent.

India has secured place among countries showing the lowest fatality rates in the world, according to the Ministry of Health and Family Welfare (MoHFW).

The Ministry said focused efforts of the governments on early detection and isolation through aggressive testing and efficient clinical management of hospitalised cases helped lower the case fatality rate and improve the recovery rate.

With effective containment strategy, aggressive testing and standardised clinical management protocols based on a holistic standard of care, the fatality rate had dipped, it added.

"The case fatality rate is falling. It's 2.28 per cent at present," the Ministry data showed. Continuing the streak of over 30,000 recoveries a day for the 4th successive day, the Ministry said 31,991 patients were discharged in the last 24 hours.

It has taken the number of recoveries to 9,17,567, showing 64 per cent recovery rate. Because of low mortality and more people recovering, the recovered cases exceeded the active cases (4,85,114) by 4,32,453 on Monday. "Medical attention continues to be provided to all active cases in hospitals and home settings," it said.

Being the third-worst hit country, India is now adding 100,000 cases in less than three days. Last Monday, India had crossed the 11 lakh-mark and within seven days it added 300,000 more cases.

On the global front, the number of Covid-19 cases has topped 16.1 million, and deaths crossed 647,000, according to Johns Hopkins University.

As of Monday, the number of cases stood at 16,199,796 and fatalities rose to 647,910, the University's Center for Systems Science and Engineering's (CSSE) latest update revealed.

The US accounted for the world's highest number of infections and fatalities at 4,233,764 and 146,934, respectively, according to the CSSE.